An Experimental Traffic Order (ETO) will be implemented which will limit the number of vehicle movements at the Hambrook traffic lights on the A4174 ring road. These restrictions will allow east and westbound traffic to flow more efficiently and help reduce queues. This follows a government direction to improve air quality on this part of the A4174 ring road in the shortest time possible for all road users.

We were required to assess if there were any actions that could be taken to reduce the high nitrogen dioxide levels on this section of the ring road to meet the legal limits in the shortest time possible. People driving along the ring road in particular are exposed to these higher levels of nitrogen dioxide. By reducing the number of vehicles that are spending time stationary at the traffic lights, we aim to reduce nitrogen dioxide emissions and therefore improve air quality.

We have increased the level of our nitrogen dioxide monitoring to check what effect the changes make to air quality at the roadside.

An ETO is a trial which can be in place for a duration of up to 18 months, during which time consideration is given to making the order permanent. ETOs are subject to a statutory process which allows people to comment formally and provide feedback. The consultation will open when the restrictions at Hambrook are implemented on Sunday 11 August.

There are no changes to the direction of travel southbound on the B4058 from Winterbourne and both pedestrians and cyclists will still be able to cross using the existing facilities.

Cabinet Member for Transport Cllr Steve Reade said: “These changes follow the government’s Joint Air Quality Unit (JAQU) direction, which we are obliged to comply with, to improve air quality on this part of the A4174 ring road in the shortest time possible for all road users.
“Our traffic modelling has shown that the changes will allow east and westbound traffic on the ring road to flow more efficiently and help reduce queues, and that the removal of limited movements at the interchange will improve traffic flow for all vehicles. I have also asked that the road markings around the roundabout be refreshed so that users will follow the correct lane for their direction of travel, so reducing inadvertent delays.
“It is important to note that this is an experimental order that can be amended through time, so if we see a particular type of road user is negatively affected then the order can be adjusted.”

More information is available at www.southglos.gov.uk/transport-and-streets/streets/roads-road-works/major-roadworks/hambrook-air-quality-action/ 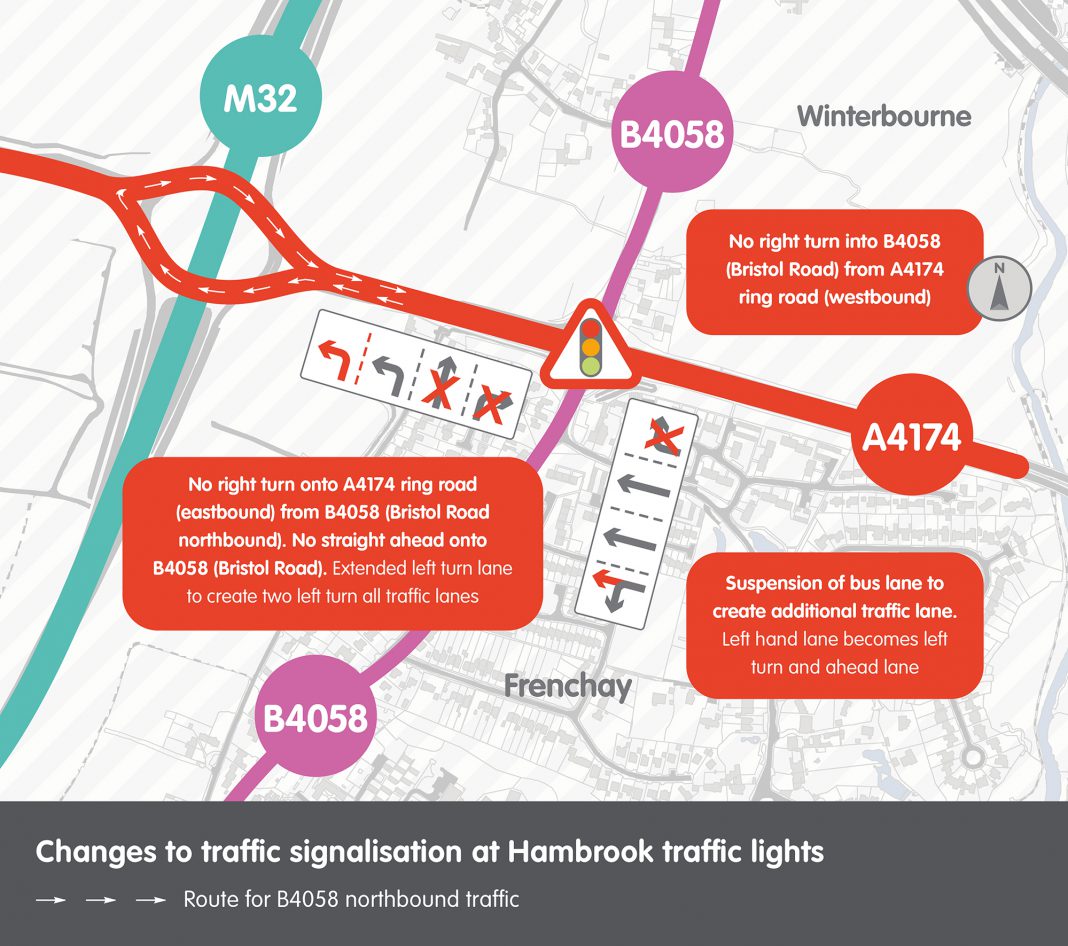