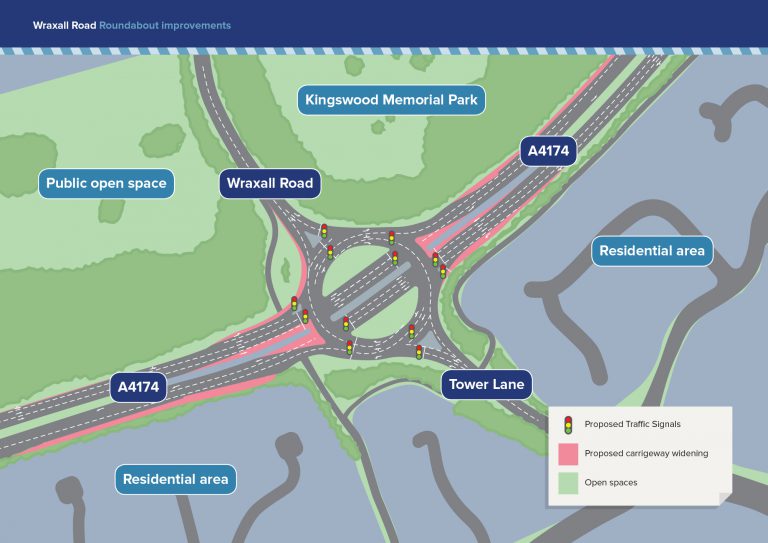 The current roundabout at Wraxall Road on the A4174 ring road will have its capacity increased on all approaches and forms part of a £174million investment in our roads to reduce congestion, improve pedestrian and cycling facilities and future proof our network.

The improvements to Wraxall Road roundabout are being funded by the West of England Combined Authority, and include converting the existing roundabout into a fully signal controlled throughabout (a roundabout with lanes of traffic through the middle), which will help to reduce delays at busy periods by managing the volumes of traffic in a controlled manner.

Wraxall Road roundabout currently experiences congestion during the busiest hours on weekdays, with queuing causing delays on the ring road and also to motorists entering the roundabout using Tower Lane and Wraxall Road. With more housing and commercial development planned for the area, this project will help the network to cope with any increase in traffic.

South Gloucestershire Council’s Cabinet Member for Planning, Transport and Strategic Environment, Cllr Steve Reade said: “This major project to improve congestion on the A4174 ring road and future proof our road network, shows our commitment to investing in our roads so we are ready and prepared for any increase in traffic brought about by housing and commercial development in the area. There will also be improvements to walking and cycling routes and enabling the traffic to flow better through the area should help to improve air quality.

“It is important that we make these improvements now to not only prepare for the future, but also for the thousands of people currently using this junction on a daily basis to reduce any delays and make it even safer. We will do everything possible to minimise any disruption and we thank people for their patience.”

West of England Mayor, Tim Bowles, said: “Getting our region moving and cutting congestion is one of my big priorities for the West of England. That’s why we’ve invested millions in improving some of our region’s busiest routes and making it easier to use public transport, walk, cycle or drive. This sort of investment improves the daily journeys for thousands of our residents and businesses and I’m very pleased to see the work starting.”

Work will start on site with overnight closures from Saturday 1 August until Friday 7 August, from 8pm to 6am, on both sides of the ring road from the A420 Deanery Road roundabout to the Longwell Green (Kingsfield) roundabout. The closures will allow us to put narrow lanes in place on the ring road and on the roundabout itself.

Construction work will be carried out in phases and will last around 13 months.

To minimise disruption, the majority of the construction work will be carried out using narrow lanes as traffic management. However, as the ring road is a major route, narrow lanes may cause some disruption as traffic levels increase following the easing of lockdown restrictions due to Covid-19.

As the scheme progresses, there will be a need to temporarily close some roads next year with the project expected to be completed by September 2021. To protect road users during the construction phase, we will be installing temporary barriers in both directions of the ring road and on the roundabout.

Further information, including a map of the phases of work, frequently asked questions and a video showing how the roundabout will operate can be found on our website www.southglos.gov.uk/majorroadworks