Of particular relevance to both transport planning and public health are injuries due to traffic collisions. Worldwide, traffic collisions are one of the leading causes of death among youth and young adults. In an important contribution to public policy by Rose it has been showed that a preventive measure that brings large benefits to the community may offer little to each participating person. For example, to prevent one death due to a motor vehicle crashes, many hundreds of people must wear seat belts. Conversely, an intervention which brings much benefit to an individual may have a small impact in the population. Building from this prevention paradox, the primary concept of Rose’s strategy is that the majority of cases of injury and illness, such as from traffic collisions, do not occur in individuals at high risk. Thus, “a large number of people exposed to a small risk may generate many more cases than a small number exposed to a high risk”. 1

In transport research, the volume and speed of motor vehicle traffic can be considered two of the fundamental causes of collisions, for all road users. Exposure to moving vehicles is a fundamental cause of road traffic deaths and injuries. As such, a global reduction in the amount of motor vehicle kilometres driven would result in a reduction of the likelihood of collisions for all road users, a left shift in the risk of road death and injury (Figure).2 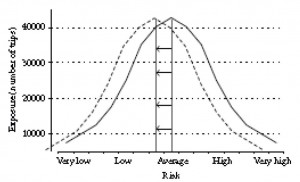 Figure: Theoretical distribution of the exposure to risk of road death and injury, showing a reduction in the average exposure for the entire continuum of risk (dotted line).

For all road users, a reduction in motor traffic volume contributes to a lower risk of injury and death. Significant public health benefits could be achieved through macro-level interventions that influence the level of exposure to motor traffic volumes for all road users, for example, land use and transport policies that encourage using safer transport modes (e.g. public transport) and area-wide 20mph schemes covering whole urban areas, among others. Challenges to such population strategies include global economic forces lead by major car and oil companies in influencing road collision research and debates.