We are still awaiting an examination date from PINS, with their latest update as follows:

“Consistent with the Written Ministerial Statement of 13 May 2020, the Examining Authority is considering whether and how virtual events should proceed for this case, including the practical measures needed to ensure fair participation by all. An update will be provided as soon as one is available.”

Despite the ongoing disruption from the Covid-19 outbreak, the project team are continuing to prepare for the examination period from home. This process involves reviewing the relevant representations made to PINS and ongoing engagement with stakeholders. We are awaiting an examination date from PINS however due to the ongoing issues this is likely to cause a delay to the start date. PINS have published an advice note on their website which can be read here

PINS published the 129 relevant representations from those who registered to put their case on the DCO scheme. These can be viewed on PINS website

A number of residents from the Easton-In-Gordano area had some questions regarding the proposed construction compound at Lodway. An FAQ was sent to all affected households. The letter and FAQ can be viewed on our document store

The annual vegetation cut of the disused line between Portishead and Pill has been completed. The cut is essential to ensure continued survey access and to reduce overgrowth in preparation for the construction phase. 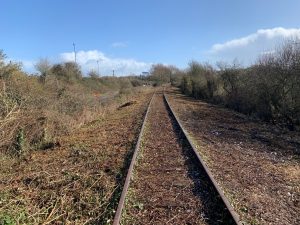 The Planning Inspectorate (on behalf of the Secretary of State for Transport) has accepted the Development Consent Order (DCO) Application made by North Somerset District Council. The Application was made on 15th November 2019 and accepted for examination on 12th December 2019. The acceptance letter can be read on PINS website.

The final application consists of:

When printed and stacked the application is around 7ft high!

A hard copy of the full suite of Application documents, including plans, maps and other documents may be inspected free of charge at Portishead Library, Pill Resource Centre, and Bristol Central Library until further notice.

The Application documents are also available to view online here, or through the Planning Inspectorate’s website.

At a Full Council meeting in June 2019, North Somerset Council agreed to submit a Development Consent Order (DCO) application to the Planning Inspectorate for the £116m MetroWest Phase 1 scheme. The DCO application seeks powers to build and operate the disused section of railway from Portishead to Pill, gain environmental consent to undertake works to the existing freight railway through the Avon Gorge and obtain powers for the compulsory acquisition of land. Councillors also agreed to enter into a new formal agreement with Network Rail.

Relaunching train services from Portishead with new stations at Portishead and Pill is a key part of the first phase of the MetroWest programme of transport improvements across the region being led by the West of England Combined Authority (WECA) and North Somerset Council.

The West of England Joint committee has also confirmed a £500,000 allocation to the MetroWest scheme, following the Transport Secretary’s commitment of an extra £31.9m to complete the funding needed. The Severn Beach line extension to Bath and Westbury is also on track for 2021.

Once the application is registered by the Planning Inspectorate, the Secretary of State for Transport is expected to make a decision within 18 months.

Subject to final business case approval, construction work is expected to start on the Portishead to Bristol line in December 2021 and take around two years to complete.

In April 2019, MetroWest Phase 1 received over £31m funding from the Department for Transport (DfT). The announcement was made by Chris Grayling, the Secretary of State for Transport at a visit to Portishead. The funding announcement comes ahead of the submission of a Development Consent Order (DCO) to the Government this Summer. All nationally-significant infrastructure projects require a DCO before they can progress.

As well as reopening the Portishead Rail branch line, with two new stations at Portishead and at Pill, this MetroWest scheme also includes vital improvements to passenger services along the Severn Beach and Bristol to Bath Lines.

The Stage 2 Consultation on re-opening the Portishead branch line as part of MetroWest Phase 1 was held from 23 October to 4 December 2017.

We received over 1,000 responses from members of the community, statutory bodies, landowners and other interested parties. Issues raised have been captured and considered in the Stage 2 Consultation Report which is now available and will help develop the scheme.

We will continue to engage with individual stakeholders on outstanding issues or concerns regarding the development of the project as we finalise the application for a Development Consent Order (DCO). Thank you to everyone who took part.

The MetroWest proposals are being delivered in two phases, Phase 1 and Phase 2, along with a separate new stations package looking at the potential for future new stations.