Daily travel behaviour, in particular mode choice, is seen as a habitual act. This is often to the extent that the prospect of change is inhibited or prevented (Verplanken et al, 1997, Kenyon and Lyons, 2003). The Dft Behavioural Insights Toolkit (DfT, 2011) notes that timing is important for breaking habitual behaviour with moments of change (‘periods of transitions such as going to university, starting work, moving house, changing job, or retiring’) providing ‘windows of opportunity’ when behaviour is consciously considered.

Ouellette & Wood (1998) support this, and suggest two criteria for breaking habitual behaviour are a change in situational context and an increase in consciousness of the behaviour. This has been shown in practice in the review of the ‘Effects of Smarter Choice Programmes in Sustainable Towns’ (Sloman et al, 2010). In this study it was noted that the biggest falls in car driver mode share were among groups at either a point of change in their lives or at a reduced income. Both factors are likely to apply to a typical student demographic.

The research show that a good time to influence travel behaviours is at key transition points in people’s lives. These tend to be times in which habits and patterns of behaviour are disrupted, and new ones established. For this reason much of the focus of this toolkit is based around two key transition points:

Importantly, when reaching a major transition point, not everyone considers their future travel choices at the same time. Stanbridge and Lyons (2006) show people start considering travel options at different points when relocating or moving house. For some travel options are the prompt for the move, for others it is only a consideration while selecting and viewing properties, and for others still they do not consider travel choices until they have moved. What’s more, thinking about moving house or relocating could have a bigger impact on travel choices than the actual house move itself. This suggests messages around travel options should be provided to students.

Some negative predisposing factors are (not an exhaustive list);

It is worth noting that concerns about safety are higher among non-cyclists than regular riders (Rissel et al, 2002) with non-cyclists consistently overestimating the level of risk involved. People with varying levels of cycling experience perceive traffic safety differently. Based on qualitative research with women, Garrard (2003) suggests that this is more to do with skills, self-confidence, experience and route familiarity – when these increase, traffic safety concerns decrease.

Some recent research suggests image is being increasingly recognised as an important factor in influencing an individual’s likelihood to cycle (Daley and Rissel, 2011). In a recent study, Gatersleben and Haddad (2010) examined the views held by UK adults about the typical UK cyclist by exploring perceptions about possible cyclist stereotypes. Findings identified how negative cyclist stereotypes may act as a barrier to cycling uptake in non-cyclists.

From the Leonard et al (2011) research, groupings of cycling segments became apparent such as ‘environmental activist’ or ‘sporty commuter’. Many of these segments have negative connotations, however findings showed the image of the ‘leisure cyclist’ out for a gentle ride had more positive connotations. This may be more in-line with some individuals self-concept, so using the positives from leisure cycling may be a gateway to utility cycling. Chaterjee et al (2013) supports this, with findings from a qualitative study suggesting that leisure and fitness interests can often be a trigger for more regular utility cycling. It is noted that the student demographic (largely young adults) are particularly sensitive to image and the norms of their social groups (Bird, 2013).

Budget – the budget for creating and promoting the survey, interviews, video diaries, co-creation workshops and writing the report was £22,000. Smaller scale research can be carried out at a much lower cost (ie in-house)
Time resource – 10 weeks
Across both first and second years, cost and speed were the two most common priorities when students were asked about their commute to university. Students’ perceptions of the costs of different travel modes were found to be quite accurate, and if anything the cost of car use was overestimated. It does not appear perceptions need to be re-aligned significantly here.

In relation to perceptions of cycling a few barriers are identified by students as stopping them biking more;

By far the most common barrier is that cycling is just not for them. This accounts for roughly a third of students’ main reason for not biking over both first and second years. Bound up in both self-perceptions and perceptions of cyclists, this poses the greatest potential for change through marketing and branding.

Cost appears to be a big motivator of student behaviour in general, and this may be a good angle for marketing messages.

“I always try to go for cheapest alternatives in shops etc. Cycling saves me the most money as travel is so expensive”
– Male second year

“There is the bus, but it’s mainly for financial reasons that we all walk to uni”
– Female second year 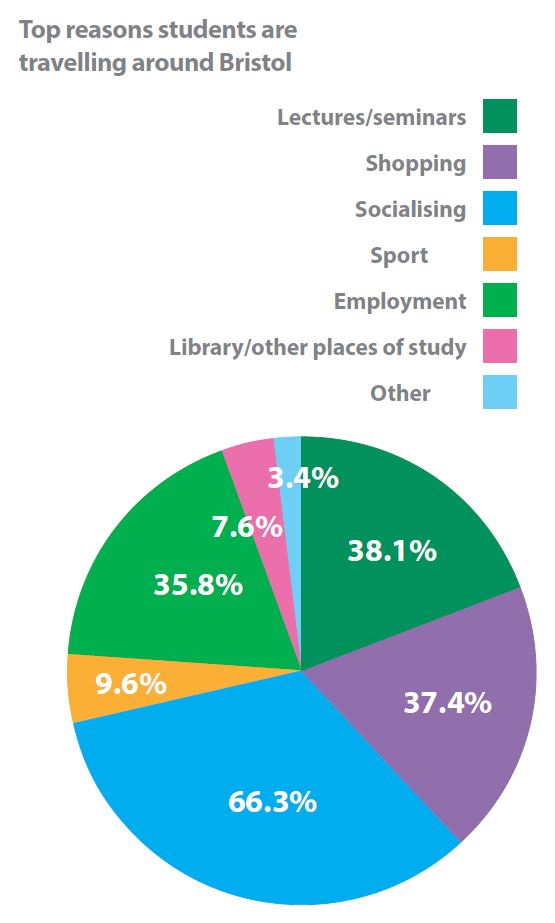 A big priority for students is getting to university quickly, so perceptions were explored regarding the fastest way to commute to university.

The survey also probed into general reasons for travelling around Bristol. The findings showed a large change in priority between the first and second year. First years tend to envisage socialising will be the predominant reason they travel, followed by lectures, shopping and employment.

This pattern is reversed for second years, who pick the predominant reason as attending lectures, followed by socialising and shopping, while employment falls off.

This pattern potentially provides an opportunity to base messaging around the social aspects of more sustainable modes, ideally group bike rides and walks but also bus and car sharing.